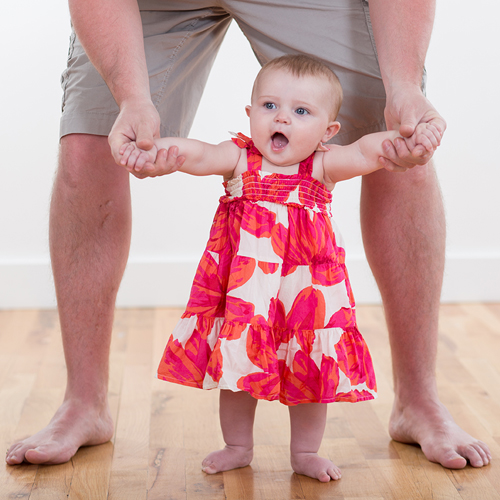 The first few months of your newborn’s life are often difficult.  First time parents especially are adjusting to the shock!  Remember that at about six weeks, a routine begins to emerge.  Until then, just try to rest during the day when possible and call upon friends and family for help. Let our handouts guide you though your babies developmental milestones.

2 WEEKS
Most babies have an acne type rash on their face between three to twelve weeks. This is normal due to hormonal changes and will resolve by three months. The circumcision should be completely healed, and the umbilical cord should be off soon. A tub bath may be given when the cord falls off.

2 MONTHS
Lifts head when on tummy. Follows with eyes. Responds with a smile. Responds to noise.

6 MONTHS
Rolls over and may creep on stomach (army crawl). Reaches for objects and holds them. Sits leaning forward in a tripod position and usually falls over when he reaches for something. Recognizes that someone is a stranger and may be afraid of them, even a relative they have not seen in a couple of weeks. Cries when left alone in a room. May begin to make consonant sounds like “Da Da, Ba Ba, Ma Ma”, the start of babbling.

9 MONTHS
Sits alone and plays with objects while sitting. Crawls or scoots and then pulls to standing. Picks up small objects with thumb and forefinger, transfers objects from one hand to the other hand. Looks for fallen objects or objects hidden under a blanket. Babbles consonants like “ba ba”, and shows understanding of what you say. New fears—strangers (even grandparents), vacuum cleaners, big bathtub, animals, balloons, clowns.

12 MONTHS
Takes first steps, likes to climb and falls frequently, waves bye bye. Uses a cup fairly well and starts using a spoon. Has definite moods and can be negative for no reason. Follows simple commands (They understand more than they can say.) Receptive language is ahead of expressive language.

15 MONTHS
Walks….Runs…..Climbs. Stacks blocks and puts large puzzle pieces in place. Does not understand sharing or taking turns so it is hard to play with other kids his age, prefers an older child or adult. May hit or even bite another child when he doesn’t get his way until he learns to “use his words.” Teach him names for his feelings like mad, sad and happy. Eats independently with a spoon and maybe a fork. Removes some clothing. Says an increasing number of single words and understands your complete sentences.Tends to be independent, wanting to do things for himself, but: is easily frustrated—They know more and want to do more than their physical and verbal skills allow.

18 MONTHS
Able to throw a ball but rarely catches one. Independently feeds himself and lets you know when he has had enough. Never force more food than he wants. Scribbles with a crayon (everywhere – watch out) Turns pages in a book. Points to body parts when asked. Single words are increasing and can understand your complete sentences. Indicates wants now by pointing or single words. Give him choices when possible…(Do you want the blue or red cup?) Imitates older kids or parents (cleaning, dancing, dress-up.)